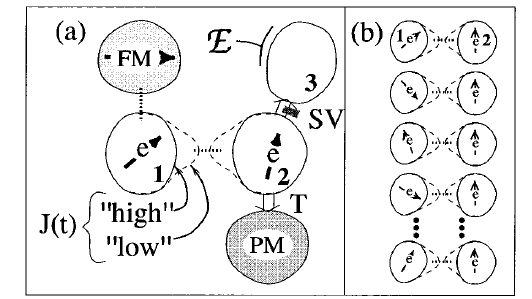 More than 20 years ago, Daniel Loss and David DiVincenzo proposed an electrically controllable quantum computer based on quantum dots. Their paper is listed among Physical Review A's 50th Anniversary Milestones.

The year 2020 marks Physical Review A's 50th anniversary. As part of the celebrations, the journal presents a collection of milestone papers:

As pointed out by the journal, this collection contains papers that have made important contributions to quantum information and atomic, molecular, and optical physics by announcing significant discoveries or by initiating new areas of research. Many of them have also had a far-reaching impact on other subjects of physical sciences.

Among these anniversary milestones is "Quantum computation with quantum dots" by Prof. Dr. Daniel Loss (University of Basel, Department of Physics) and Prof. Dr. David P. DiVincenzo. Their manuscript was published on arxiv.org in January 1997 and in Physical Review A about a year later. Since then, their work has become one of Physical Review A's highest-cited articles. The journal writes: "In this paper, Loss and DiVincenzo laid out a proposal for quantum computation based on quantum dots. A detailed implementation of a universal set of one- and two-quantum-bit gates using the spin states of coupled single-electron quantum dots is presented. Following the proposal, significant theoretical and experimental achievements have made quantum dots another candidate platform for quantum computation."

The proposal by Loss and DiVincenzo has also had a significant impact on various research activities in our department and laid the foundation for the new National Centre of Competence in Research "SPIN: Spin Qubits in Silicon".