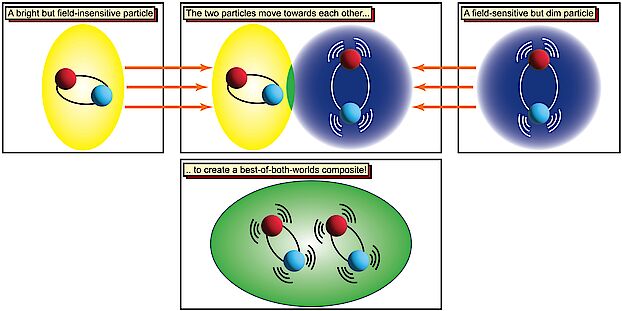 The coupling of two different electron-hole pairs leads to a fusion of their properties. (Image: L. Sponfeldner, SNI and Department of Physics, University of Basel)

For the first time, physicists from the University of Basel have succeeded in coupling different types of electron-hole pairs (excitons) in the van der Waals material molybdenum disulfide. This successful coupling allows them to utilize and control the different properties of the two types of electron-hole pairs — and could pave the way for the production of a novel source of individual particles of light (photons). Moreover, the study and modeling of exciton-exciton coupling is key to gaining a better understanding of the underlying semiconductor physics. In collaboration with colleagues from the University of Toulouse, the researchers recently published their findings in the journal Physical Review Letters.

Two-dimensional van der Waals materials have been the focus of work by numerous research groups for some time. Standing just a few atomic layers thick, these structures are produced in the laboratory by combining atom-thick layers of different materials (in a process referred to as “atomic Lego”). Interactions between the stacked layers allow the heterostructures to exhibit properties that the individual constituents lack.

Formation of various electron-hole pairs
Two-layered molybdenum disulfide is one such van der Waals material, in which electrons can be excited using a suitable experimental setup. These negatively charged particles then leave their position in the valence band, leaving behind a positively charged hole, and enter the conduction band. Given the different charges of electrons and holes, the two are attracted to one another and form what is known as a quasiparticle. The latter is also referred to as an electron-hole pair, or exciton, and can move freely within the material.

In two-layered molybdenum disulfide, excitation with light produces two different types of electron-hole pairs: intralayer pairs, in which the electron and hole are localized in the same layer of the material, and interlayer pairs, whose hole and electron are located in different layers and are therefore spatially separate from one another.

These two types of electron-hole pairs have different properties: Intralayer pairs interact strongly with light — in other words, they glow very brightly. On the other hand, interlayer excitons are much dimmer but can be shifted to different energies and therefore allow researchers to adjust the absorbed wavelength. Unlike intralayer excitons, interlayer excitons also exhibit very strong, nonlinear interactions with one another — and these interactions play an essential role in many of their potential applications.

Merging of properties
Now, the researchers from the group led by Professor Richard Warburton of the Department of Physics and the Swiss Nanoscience Institute (SNI) of the University of Basel have coupled these two types of electron-hole pairs by bringing the two of them to similar energies. This convergence is only possible thanks to the adjustability of interlayer excitons, and the resulting coupling causes the properties of the two types of electron-hole pair to merge. The researchers can therefore tailor-make merged particles that are not only very bright but also interact very strongly with one another.

“This allows us to combine the useful properties of both types of electron-hole pairs,” explains Lukas Sponfeldner, a doctoral student at the SNI PhD School and first author of the paper. “These merged properties could be used to produce a novel source of individual photons, which are a key element of quantum communication.”

Compatible with classical models
In the paper, which was published in Physical Review Letters, the researchers also show that this complex system of electron-hole pairs can be simulated using classical models from the fields of mechanics or electronics. Specifically, electron-hole pairs can be very effectively described as oscillating masses or circuits. “These simple and general analogies help us to gain a better understanding of the fundamental properties of coupled particles, not only in molybdenum disulfide but also in many other material systems and contexts,” explains Professor Richard Warburton.