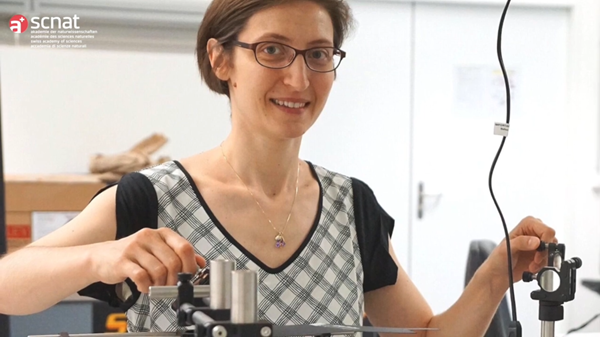 This project of the Platform MAP aims to show how women scientists in the formerly male fields of mathematics, astronomy and physics (MAP) have successfully established themselves in Switzerland. It aims to encourage young women to pursue an academic career. The portrait series was launched on 8 March 2021 (International Women's Day) and will be published monthly during 2021.

In Italy, female high school graduates choose to study physics much more naturally than it has been the case in Switzerland so far. Ilaria Zardo was one of these young Italian women who first became enthusiastic about studying physics and later about academic research. Today, as a professor at the University of Basel, she and her research group study heat flows at the nanoscale level.

Ilaria Zardo's career as a physicist began with a misunderstanding. She was born in Rome in 1981 as the daughter of a primary school teacher and a doctor and also spent her school years in the Italian capital. Towards the end of the classical language high school, she told her parents that she would like to study 'fisica'. "You want to be a sports teacher?" her father asked in amazement. "No, a physicist!" the daughter replied. That was the other meaning of the Italian word 'fisica'. A little later, she began studying physics at the renowned Sapienza University in her hometown.

25 years later, Ilaria Zardo is sitting in her office on Klingelbergstrasse in Basel, home to the Physics Department of the University of Basel. The physicist has been researching and teaching in Basel since 2015, first as an assistant professor and since last year as an associate professor. Zardo is one of two women among the 14 professors in the physics department. Especially when dealing with older colleagues in the scientific community, she sometimes still feels that she is working in a male domain. She doesn't experience obvious discrimination, it's more subtleties, as Ilaria Zardo reports: "It's the way these men deal with you, how they express themselves or how they defend their ideas." With younger colleagues, this subtle disparagement is less noticeable. They usually have a different image of women because their wives are also working.

Ilaria Zardo lives on the Bruderholz in Basel with her husband and three children aged 8, 6 and just under one year. Even now, during the Corona period, she is in the office three days a week, doing administrative work and supervising the experiments of her research group, which continue despite the pandemic, albeit to a limited extent. It was never a question for Ilaria Zardo that she would reconcile her scientific career and her family. "In Italy it is common for women to work. That is probably also the reason why relatively many women decide to study physics," says Ilaria Zardo, but then adds: "In the course of a scientific career, however, the gap opens up in Italy, too. At the level of professors, the proportion of women is almost as low as in Switzerland or Germany."

Expert on heat transport in nanostructures

At Ilaria Zardo's chair, the gender issue seems to be a thing of the past. Both genders are equally represented in her research group. She doesn't even have to pick the women out of the junior cadre, because she always has competent applicants when she can fill a doctoral or postdoctoral position. This is probably also due to the attractiveness of her research topic: phonons. Phonons are collective vibrations of atoms arranged in an atomic lattice, as is the case in semiconductor materials, for example. These oscillations - in the language of physics, they are described like particles - form the basis for the transmission of heat and sound in crystalline solids, according to current knowledge. "My research group aims to use phonons to influence heat transport in semiconductors such as silicon and germanium in particular, for example via the frequency at which the phonons oscillate," Prof. Zardo explains her research area.

Atoms have a size of about 0.1 nanometres, which corresponds to one tenth of a millionth of a millimetre. Since Zardo and her colleagues work in this size range, their field of work is also called 'nanophononics'. A deeper understanding of heat transport in semiconductor materials opens up fascinating perspectives: This knowledge could pave new ways to improve the energy efficiency of semiconductor components. It is even conceivable to use heat flows on a nanoscale to transmit information, analogous to the flow of charges in electric circuits. The investigation of nanostructures or their targeted synthesis could also help in the construction of quantum computers in the future, a research focus of the University of Basel.

A prize exclusively for women

The attractiveness of the research field is reflected in the funding Ilaria Zardo has been able to attract in recent years: in 2018, it was an ERC grant, a prestigious young researchers' grant from the European Research Council (ERC). Since last year, additional funds have been flowing in from the Synergia programme of the Swiss National Science Foundation and a National Centre of Competence in Research (NCCR) in the field of quantum computing. The Basel scientist is implementing these projects in cooperation with other colleagues from the University of Basel and colleagues from the Swiss Federal Institutes of Technology in Zurich, Lausanne, and from IBM Research.

The 40-year-old researcher has already received several awards on her way through her doctoral studies in Munich and her post-doctoral period in Eindhoven (Netherlands). In 2015, she received the Hertha Sponer Prize, with which the German Physical Society (DPG) honours outstanding work by female scientists. The certificate is on the shelf behind the desk in Zardo's office. Is a prize exclusively for women still appropriate today? "This question was very much on my mind at the time," says Ilaria Zardo, "in an ideal world we wouldn't need this kind of award. But unfortunately, the discrimination of women continues to be a reality in science as well, and as long as it is like that, such prizes are justified - and important. Because they show young women that it is possible to get ahead."

Portrait #2 of Women in science in the fields of MAP (2021), (Orginalarticle)