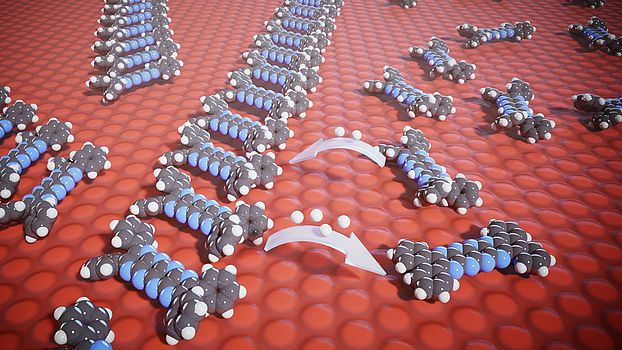 An interdisciplinary, multinational research team presents a new class of chemical compounds that can be reversibly oxidized and reduced. The compounds known as ‘pyrazinacenes’ are simple, stable compounds that consist of a series of connected nitrogen-containing carbon rings. They are suitable for applications in electrochemistry or synthesis, as the researchers describe in the science journal Communications Chemistry.

Redox reactions also play a crucial role in electrochemistry, where energy can be stored or transported in the guise of chemical compounds. Most chemical syntheses also involve reduction and oxidation reactions at their fundamental levels. Researchers around the world are therefore looking for simple, stable chemical compounds that can be reversibly oxidized and reduced and thus also function as reducing or oxidizing agents.

Multi-stage oxidation possible
The teams led by Dr. Jonathan P. Hill from the National Institute for Materials Science in Tsukuba (Japan) and Professor Thomas Jung from the University of Basel and the Paul Scherrer Institute (Switzerland) have now shown experimentally for the first time that pyrazinacenes meet these requirements and can be reversibly oxidized in a multi-stage process.

The pyrazinacenes are a new category of compounds made up of connected rings of carbon, nitrogen and hydrogen atoms. They were first designed, synthesized and chemically characterized in solution by the Hill team.

In solution, the compounds, which can consist of different numbers of connected rings, can reversibly release and accept electrons. This aspect, which would otherwise be studied in a test tube, has now for the first time been observed experimentally on a surface by the Jung team from the Department of Physics and the Swiss Nanoscience Institute at the University of Basel. “The pyrazinacenes oxidize reversibly on a surface in several steps. For their technical application, it is important to know that they also support redox reactions when bound to surfaces,” reports Dr. Fatemeh Mousavi, who characterized pyrazinacenes in the Jung group.

Oxidation state can be recognized
Using scanning tunneling microscopy and X-ray photoelectron spectroscopy, the scientists observed that the compounds arrange themselves differently depending on the oxidation state. In the native reduced form (obtained directly after synthesis), the molecules are isolated and immobile when deposited on a surface, while they mobilize to form chains after a first oxidation step. A second oxidation step changes the geometry of the molecule and they are again isolated and immobile.

Interestingly, the oxidation and reduction reactions of the pyrazinacenes are not only affected by a chemical impulse, but can also be stimulated by light so they can be considered photo-redox active.

“Our investigations have shown that pyrazinacenes are an interesting class of compounds that can be used to support photoredox-based reactions in chemical synthesis, or act as indicators of electrochemical processes,” concludes Thomas Jung.