New Type of Qubit with Tunable Speed and Frequency 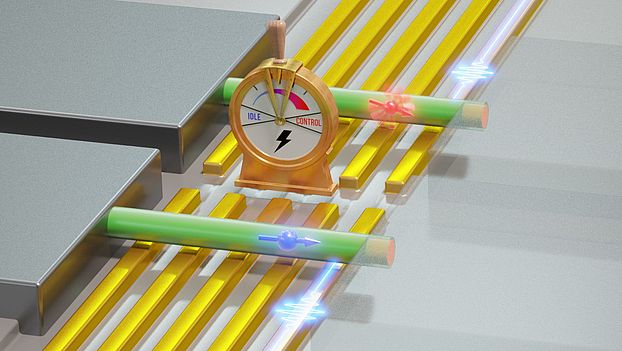 A tiny nanowire (diameter ~20 nm) with Germanium core (blue) and Silicon shell (green) on top of nanofabricated metallic electrodes, the gates (gold). By applying voltages to the gates, individual spin qubits (blue and red arrows) are formed in the nanowire. These qubits are manipulated by microwave signals on the nanogates (blue pulses). In this qubit, the speed and frequency of operation can be electrically tuned with a gate voltage, as indicated by the speed control switch: in “idle” mode, the qubit is slow and quantum information more stable (blue spin). In the “control” mode, the qubit can be changed fast (red spin).

Physicists from the University of Basel and the TU Eindhoven have demonstrated a new type of qubit – the basic building block of a quantum computer – where the speed and frequency of operation can be widely tuned with a gate voltage. They used this flexibility to optimize the hole spin qubit to operate very fast, coherently flipping the spin from up to down in as little as ~1 ns – approaching the clock speeds of today’s computers. The experiment is a big step towards interconnecting and scaling to larger numbers of qubits and thus towards the ultimate goal of building a quantum computer.

A conventional computer, operating with the rules of classical rather than quantum physics, is built from billions of silicon transistors combined on a chip in an integrated circuit. The smallest unit of data is the well-known bit, which may be either 0 or 1. A quantum computer, on the other hand, uses quantum bits, so called qubits. These are usually pictured as an arrow pointing in any direction of space: up can be assigned to 1, down to 0. In contrast to the classical bit, a qubit may also point into any other direction between up and down, representing a quantum superposition, which can be written as being 0 and 1 at the same time with different probabilities. The superposition principle, allowing qubits to be in multiple states at the same time, lets many computations run in parallel, making quantum computers much faster than classical computers.

At the same time as changing the operation speed, the energy or operation frequency of the qubit is changed as well – a very useful resource for selectively coupling the spin, for example to a microwave photon in a superconducting resonator, and via this to other spins. Only when the qubit frequency matches that of the resonator, the spin and the photon may be coupled. Thus, by tuning the qubit with a gate voltage into resonance with a resonator, it’s coupling to other qubits may be deliberately switched on. Such selective coupling between qubits is necessary for interconnecting and scaling to large numbers of qubits.

An Impressive Demonstration of Progress in Spin Qubit Technology

In this experiment, such a switch functionality is made possible by using the magnetism, the so-called spin, of a positive charge, a so-called hole, in a Germanium/Silicon nanowire as the qubit. An electron carries a tiny mass and a negative electrical charge. When an electron is removed, a hole is left behind, which is thus carrying effectively a positive charge. The two spin states of a single hole, the up and down states, represent the logical 0 and 1 states of the qubit. Especially in Germanium/Silicon nanowires, such holes couple much more favorably to electric fields (and also effectively decouple from nuclear spin noise), thus affording much better tunability than electrons.

About 10 years ago, hole spins in Germanium/Silicon nanowires have been predicted to offer gate-tunable speed by theoretical physicists Prof. Daniel Loss and Dr. Christoph Klöffel of the University of Basel. Moreover, the control of the switch can be done with electrical means, i.e. by changing the voltage on one of the nanostructure gates (gold bars on the image) to switch the speed and frequency of operation of the qubit.

“A very elegant method,” says Dominik Zumbühl, “as it is easy to do and very fast – compared to changes of other parameters such as temperature or magnetic field, which are much slower.”

Just how fast can these qubits be operated? The researchers demonstrated an operation time – changing the qubit from one to zero by rotating the spin with an electrical microwave pulse on one of the nanostructured gates (see blue pulse on image) – of as little as 1 ns, which allows almost one billion switches in one second. This is the fastest electrical control of a single-spin qubit in a nanostructure, an impressive demonstration of how far spin qubit technology is progressing, already approaching today’s computer speeds. Nevertheless, Klöffel and Loss predicted that even higher speeds are possible, still leaving room for further improvements.

While the electronic devices for the experiment were built in the Basel cleanroom, the researchers relied on nanowires that were grown by the group of Prof. Erik Bakkers at the Eindhoven University of Technology (NL). “These nanowires of the highest quality available – very specific semiconductor nanocrystals – were crucial for our experiment,” says Floris Braakman. These nanowires are very small, only about 20 nm in diameter, also making the size of the qubit quite small, thus in principle allowing millions or even billions of qubits to be integrated on a chip. This work was performed as part of the new Swiss national research program NCCR SPIN, which has started on August 1st, 2020, and is working on scalable spin qubits in semiconductor nanostructures made from Silicon and/or Germanium, developing small and fast qubits for a universal quantum computer. The Swiss SPIN network spans both ETH Lausanne and Zurich as well as industry partner IBM research and combines research groups working in experimental and theoretical physics, material science, engineering and computer science.

The research behind this result has been on its way for several years and will be published in Nature Nanotechnology. Only days after submission of the results to the preprint archive, a team of the Chinese Academy of Sciences in Hefei has demonstrated a slightly faster operation speed of a Germanium/Silicon hut wire hole spin as well. Nevertheless, the proof of concept of the tunable qubit speed and frequency was demonstrated only in this work here, and is a key step towards scalable spin qubits.