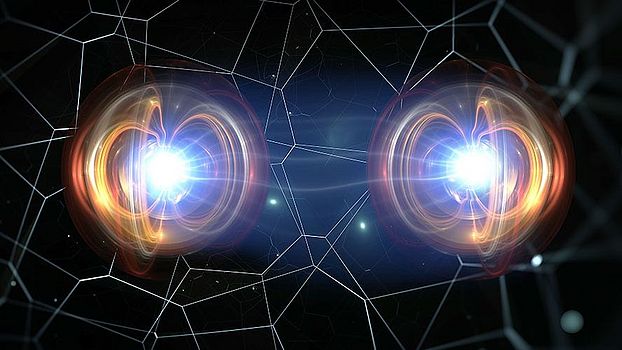 Quantum systems consisting of several particles can be used to measure magnetic or electric fields more precisely. A young physicist at the University of Basel has now proposed a new scheme for such measurements that uses a particular kind of correlation between quantum particles.

In quantum information, the fictitious agents Alice and Bob are often used to illustrate complex communication tasks. In one such process, Alice can use entangled quantum particles such as photons to transmit or “teleport” a quantum state – unknown even to herself – to Bob, something that is not feasible using traditional communications.

However, it has been unclear whether the team Alice-Bob can use similar quantum states for other things besides communication. A young physicist at the University of Basel has now shown how particular types of quantum states can be used to perform measurements with higher precision than quantum physics would ordinarily allow. The results have been published in the scientific journal Nature Communications.

Quantum steering at a distance

Together with researchers in Great Britain and France, Dr. Matteo Fadel, who works at the Physics Department of the University of Basel, has thought about how high-precision measurement tasks can be tackled with the help of so-called quantum steering.

This phenomenon is also known as the EPR paradox, named after Albert Einstein, Boris Podolsky and Nathan Rosen, who first described it in 1935. What is remarkable about it is that it works even if the particles are far apart because they are quantum-mechanically ʻentangledʼ and can feel each other at a distance. This is also what allows Alice to transmit her quantum state to Bob in quantum teleportation.

“For quantum steering, the particles have to be entangled with each other in a very particular fashion,” Fadel explains. “We were interested in understanding whether this could be used for making better measurements.” The measurement procedure he proposes consists of Alice’s performing a measurement on her particle and transmitting the result to Bob.

Thanks to quantum steering, Bob can then adjust his measurement apparatus such that the measurement error on his particle is smaller than it would have been without Alice’s information. In this way, Bob can measure, for instance, magnetic or electric fields acting on his particles with high precision.

The study of Fadel and his colleagues now makes it possible to systematically study and demonstrate the usefulness of quantum steering for metrological applications. “The idea for this arose from an experiment we already did in 2018 in the laboratory of Professor Philipp Treutlein at the University of Basel,” says Fadel.

“In that experiment, we were able to measure quantum steering for the first time between two clouds containing hundreds of cold atoms each. After that, we asked ourselves whether it might be possible to do something useful with that.” In his work, Fadel has now created a solid mathematical basis for realizing real-life measurement applications that use quantum steering as a resource.

“In a few simple cases, we already knew that there was a connection between the EPR paradox and precision measurements,” Treutlein says. “But now we have a general theoretical framework, based on which we can also develop new strategies for quantum metrology.” Researchers are already working on demonstrating Fadel’s ideas experimentally. In the future, this could result in new quantum-enhanced measurement devices.

Full article was published on the UniNews page here.

The original publication can be found on Nature communications