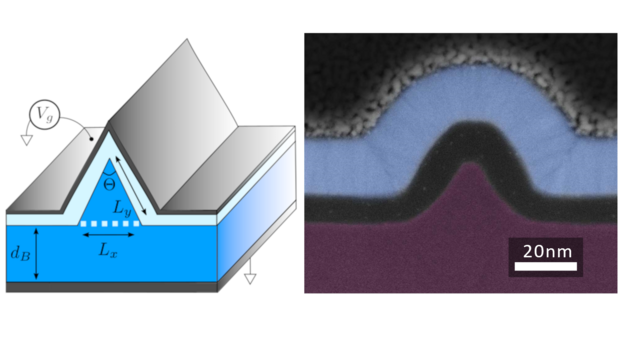 Left: schematic of a fin field-effect transistor (finFET) with triangular fin. Right: Transmission electron microscope image of a silicon finFET device cross-section: voltages at the titanium-nitride gate (blue) are used to accumulate quantum dots at the silicon/silicon-oxide (purple/black) interface in the fin. In Basel, spin qubits, the building block of a spin-based quantum computer, are energized and studied in such quantum dots.

Another great success for Basel Quantum Physics: Dominik Zumbühl and Daniel Loss have won a new Quantum Flagship project together with a consortium of 10 partners from 8 European countries. The project “QLSI” - Quantum Large Scale Integration in Silicon is funded with 15 million Euros and will run for four years. This is already the fourth project within the highly competitive Flagship program in which the Basel physicists are involved. This Flagship Project ideally complements the NCCR SPIN, of which Basel is the leading house.

GRENOBLE, France –  A European consortium was launched today with the goal of scaling silicon quantum technologies. Named QLSI (Quantum Large-Scale Integration with Silicon), this four-year EU project, coordinated by CEA, will lay the foundation for the EU’s industrial-scale implementation of semiconductor quantum processors and position Europe as a global leader in quantum computing. The project will focus on demonstrating that spin qubits are the leading platform for scaling to very large numbers of quantum bits, or qubits, the building blocks of quantum information processing.

The QLSI consortium features a dynamic team with a complementary skillset, bringing together experienced academics with deep knowledge of in silicon nanostructures and spin qubits, RTOs with silicon CMOS technology expertise, major international businesses in the semiconductor and computing industries, as well as Europe’s thriving quantum start-up sector. Each member brings state-of-the-art expertise in their area required to address the challenges of building a scalable quantum computer.

The partners have already realized some key advances in the field of semiconductor spin qubits, for example the demonstration of an “Ultrafast Hole Spin Qubit with Gate-Tunable Spin-Orbit Switch” in a Ge/Si nanowire quantum dot at the Zumbühl Group, University of Basel. The QLSI consortium will take this to next level with the demonstration of a 16-qubit chip in silicon CMOS technology at the end of the project. What makes silicon so attractive? Owing to their experience, the partners have already quantified promising single qubit performance: small size, high fidelity, fast read-out and manipulation. Working with silicon, the next step is to leverage the vast infrastructure of the global semiconductor industry.

While classical computers use information as bits that are either off or on, represented by ‘0’ or ‘1’, quantum systems utilize superposition and entanglement of particles, such as electrons or photons, or other quanta. In superposition, these qubits are at 0 and 1 states simultaneously. When qubits get entangled, a primary feature of quantum mechanics, a change in one of them causes the other to also change.

Harnessing these features will make it possible to use quantum effects to make major advances in computing, sensing and metrology, simulations, cryptography, and telecommunications. Society’s benefits from quantum computing ultimately will include ultra-precise sensors for use in medicine, quantum-based communications, and hacking-proof digital data. In the long term, quantum computing has the potential to solve computational problems that would take current supercomputers longer than the age of the universe. These systems will also be able to recognize patterns and train artificial intelligence systems.

“Europe is well-positioned to take the EU’s spin-qubit R&D to the next level, in what is a high-stakes competition among advanced technological countries,” said Maud Vinet, CEA-Leti’s quantum hardware program manager, who will lead the four-year, €15 million ($17.7 million) project. “The QLSI project ramps up a dedicated effort across all leading European groups in the field of spin qubits to develop complete processor systems that eventually will reach the thousands of qubits expected as a first step to show the potential for universal, error-corrected quantum computing.”

Prof. Daniel Loss, University of Basel: “There is enormous potential for silicon spin qubits due to their small size, fast speed of operation, and compatibility with established silicon large scale processing, making it possible to scale up to large numbers of qubits as needed in quantum computing.”

The project is a recent addition to the EU’s ambitious Quantum Flagship program, a 10-year, €1 billion ($1.18 billion) R&D initiative launched in 2018. It is a coherent set of research and innovation projects selected through a thorough peer-review process. The overall goal is to consolidate and expand European scientific leadership and excellence in quantum computing, to kick-start a competitive European industry in quantum technologies and to make Europe a dynamic and attractive region for innovative research, business and investments in this field. A complementary project to this hardware-focused project focuses on software requirements for fabricating spin qubits.