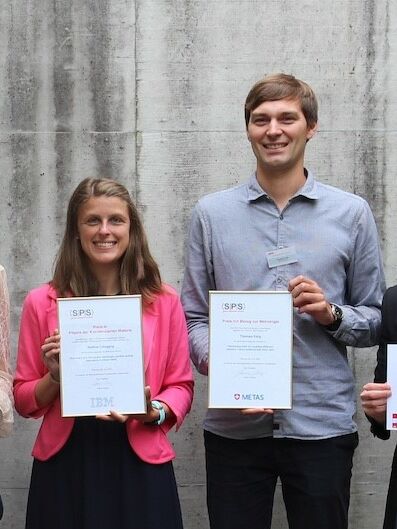 The Swiss Physical Society (SPS) awards prizes to young physicists for outstanding research in the early stages of their careers. In 2022, two former PhD students of the Department of Physics and the Swiss Nanoscience Institute have received such a prestigious award.

Nadine Leisgang has won the SPS Award in Condensed Matter Physics, sponsored by IBM. Nadine completed a PhD at the Department of Physics under the supervision of Professor Richard Warburton. Her main discovery concerns the optical properties of a two-dimensional semiconductor, bilayer MoS2. Nadine discovered an optical resonance which is both strongly absorbing and highly tunable via an applied electric field. This result, published in Nature Nanotechnology, paves the way to creating opto-electronic devices with strong yet tunable nonlinear properties.

Thomas Karg has won the SPS Award related to Metrology, sponsored by METAS. Thomas is a former student of the SNI PhD school who carried out his project in the group of Prof. Philipp Treutlein. Thomas and his colleagues observed for the first time strong coupling of a nanomechanical oscillator and an atomic spin ensemble, using a novel approach where the two systems are coupled by light across a macroscopic distance. These results, published in Science, enable new applications ranging from quantum metrology and networking to quantum feedback experiments and coherent links between quantum processors.